David’s Comments: “I constructed this model from the Robbe kit , the most difficult part of the build is the fitting of the foredeck, it takes some considerable time to trim the mouldings to get a half decent fit around the torpedo tubes. I obtained photos of the Revell S100 kit and scratch built the extra fittings for the bridge, foredeck, guns, deck gratings etc.

For power I used two Mtronic speed controllers but wired one to the centre motor with full forward and reverse functions, the wing motors are wired to a forward only controller with the neutral position set at half the throttle stick on my controller, this has the effect of only running the three motors when I need the speed and I can have a lot of control at lower speeds using the centre prop only.” 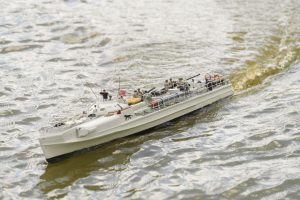 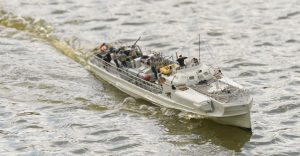 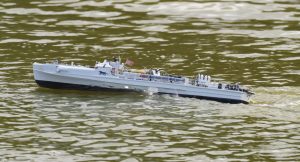 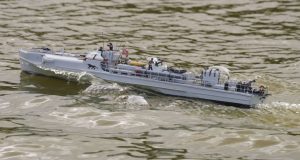