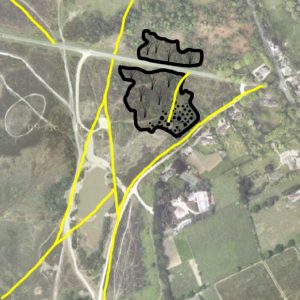 The position of the gravel pit as marked on the 1868/71 Ordnance Survey maps. Tracks shown on the maps are marked in yellow. By 1868 much of the pit area appears to have been overgrown but the southeast region may still have been in use (stippled).

Possibly the pit was originally created during the construction of the nearby Brockenhurst to Lymington railway (opened 1858) which runs on an embankment across the marshland to the west of Setley, or it may date to earlier years. The area of the present day pond was open heathland and no pond existed.

Solent Radio Controlled Model Yacht Club Home Page > Setley Pond > Pond History > Setley Gravel Pit 1868/1871
We use cookies to ensure that we give you the best experience on our website. If you continue to use this site we will assume that you are happy with it.Ok