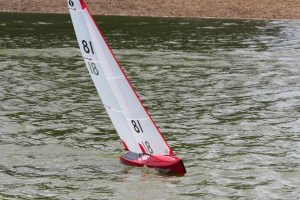 Another interesting day at Setley today. The gentle breeze somewhere between North and South, though generally in a Southwest direction gave wind streaks that would collect one of adjacent boats and whisk them away to the end of the leg leaving the other wallowing. This could be either exhilarating or very frustrating!
Peter best mastered the the randomness winning two races to win the day. Robin, who braved his “A” rig this week , also won two races finishing second just ahead of John M and John T.