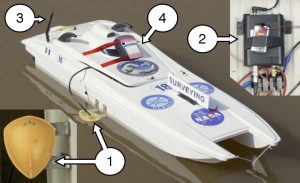 The “Survey Vessel” was a modified NQD “Admiral” catamaran equiped with a “Viper FF1” echo sounder as used by anglers on bait boats. The photo shows the Viper transducer (1), the electronics (2), and the radio transmitting antenna (3). The “Garmin Etrex” GPS satellite navigation unit (4) was internally recording. 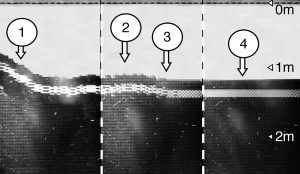 The echo sounder data were received by the Viper handset ashore and the display filmed with time marks recorded on the sound track to allow later coordination with the GPS data. The handset displays a scrolling sequence indicating the pond bottom profile, the example shown has been constructed from three display scenes and indicates (1) the slope down from the pond bank, (2) an area of gravel, (3) a transition from gravel to silt, and (4) the typical flat pond bottom covered in muddy silt. 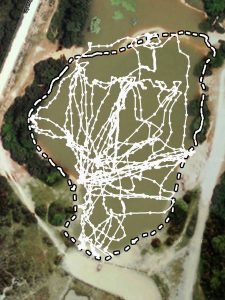 The tracks surveyed are shown in the plot. The boat was controlled from, and the sounder data received at, the “point” on the east bank of the pond, and the buoys and the planks were used as reference markers. Useful data were not obtained close to the banks or over the island since the depths were less than the minimum in which the echo sounder will work. 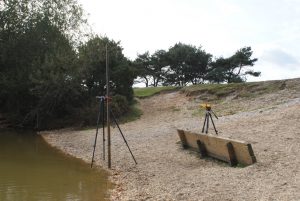 The echo sounder survey results were confirmed by wading in the pond in October, 2011, when the water level was low. A north-south and an west-east traverse confirmed the flat nature of the pond bottom and the existence of the deeper area south of the planks. The change in water level during the summer was allowed for by measuring using a laser level with the top of the planks as a reference. 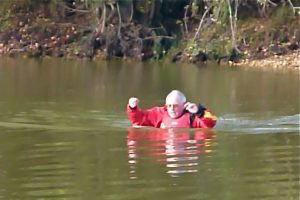 The results of the surveys are illustrated on the Pond Depth page.  We also have a light-hearted movie of wading through the pond to confirm the survey findings!

Solent Radio Controlled Model Yacht Club Home Page > Setley Pond Depth Survey
We use cookies to ensure that we give you the best experience on our website. If you continue to use this site we will assume that you are happy with it.Ok