During the 1980’s the Yacht Racing section dominated the club with typically 50 to 60 members in contrast to 20 to 30 Scale Section members. At the start of the decade the primary purpose of the club was specifically to sail and race of Marblehead (“RM”) yachts. The 1984 Newsletter reports RM yachts being raced against the Ryde and New Forest Clubs, and by 1987 an annual RM team race event was being staged with the Gosport and Guildford clubs. However the 1980’s also saw other radio controlled yacht classes being adopted at Setley.

The adoption of the R36 as a smaller, and originally less expensive, yacht class was discussed in 1984 and in 1987 the Metropolitan and Southern Division R36 Championships were staged at Setley. The R36 Class rules allow the development of different hull shapes (provided they fit into a box of set dimensions), the use of “exotic” materials such as carbon fibre, and the use of multiple sets of sails to allow for varying conditions. This led to a rapid increase in the cost of competitive boats. 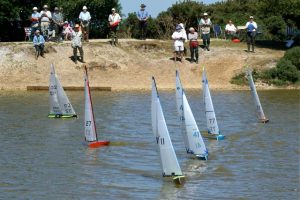 The adoption of the 1 metre as a “One Design” class was discussed by the Club in 1987. The International One Metre (IOM) eventually became recognised by Yacht Racing Organistaions as a “restricted” class with only limited variations in hull form and materials allowed. A first club IOM event was held at Setley in 1988 (when the RMs were on an “away” match!) and by 1989 IOM racing was included in the Club event programme eventually taking over from the R36’s by the end of the 1980’s.

Solent Radio Controlled Model Yacht Club Home Page > SRCMYC Yacht Racing in the 1980’s
We use cookies to ensure that we give you the best experience on our website. If you continue to use this site we will assume that you are happy with it.Ok