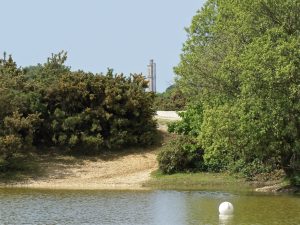 Visible from the path around Setley Pond is “Sway Tower”, also known as “Peterson’s Folly”, near the village of Sway (the photo was taken from the pond using a telephoto lens, it’s smaller viewed by eye!). At 66 metres (200 ft), it is possibly the tallest folly in the world. It is a Grade II listed building and it is tempting to think that gravel from Setley may have been used in the construction. 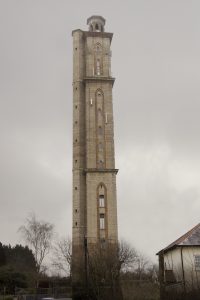 Built by Judge Andrew Thomas Turton Peterson on his private estate from 1879-1885, its design was influenced by the follies Peterson had seen during his time in India. It is constructed entirely out of Portland cement, supported by iron joists. At the time it was built, it was the tallest concrete structure in the world.

It was originally designed as a mausoleum, with a perpetual light at the top. However this was not allowed, as it was thought the light would confuse shipping. The tower is visible from much of the New Forest, and most of the western Solent. A smaller 50-foot (15 m) folly, built as a ‘prototype’, stands in a group of trees to the north of the taller tower.

Solent Radio Controlled Model Yacht Club Home Page > Sway Tower
We use cookies to ensure that we give you the best experience on our website. If you continue to use this site we will assume that you are happy with it.Ok