Club History The Sailing Section in the 1990's 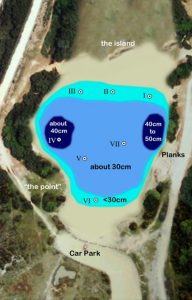 The Yacht Racing Section remained the dominant activity in the club through the 1990s with around 60 members, compared to scale membership in 1990 of just over 20. By 1991 One Metre racing had replaced R36 racing at Setley, however this did not last! Rainfall in winter 1991/92 was as low as the winter of 1975/76 which had led to the New Forest Club abandoning Setley Pond. The diagram (click to enlarge) shows the likely water depths that summer (based on the distance measured from car park to pond during one “dry” year).

Only the R36 yachts could be raced during the summer at Setley. Attempts during the autumn to race the RMs at Spinnaker Lake were hampered by weed so racing for the one metre and RM yachts was re-scheduled to the winter months at Setley and was run from November 1992 to June 1993. Further RM racing was scheduled for Spinnaker Lake the following summer with the weeds cleared using salmon nets confiscated from poachers by the water bailiff at Christchurch Harbour, Martin Houlton (presently – 2016 – Club president).

Ironically, winter 1992/93 was wet and the water was lapping the car park by February. Early 1994 saw the first Fiji Trophy race. The winter event was christened the “Fijicicle” by visitor Mark Steele (from Fiji and New Zealand) who donated the prize. Mark’s report is reproduced below (or a PDF version is available here). 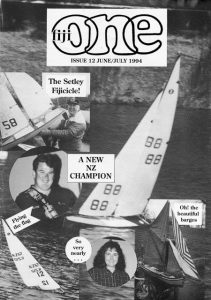 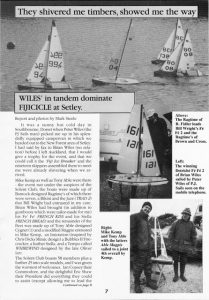 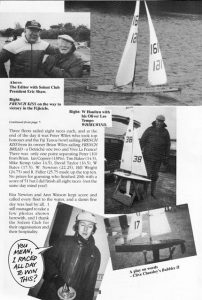 By spring of 1994 the water level was the highest since the club started with boats sailing in the car park! But, although wet winters continued through the following years, a winter racing programme had now become established at Setley as insurance against the shallow waters of summer.

Solent Radio Controlled Model Yacht Club Home Page > The Sailing Section in the 1990’s
We use cookies to ensure that we give you the best experience on our website. If you continue to use this site we will assume that you are happy with it.Ok