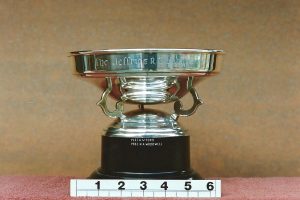 This is the oldest of the club trophies and was presented in 1974 by Mr. C.R. (Bob) Jeffries a founder member of the club. At that time the club was known as the New Forest Model Yacht Club and following a drying out of Setley lake during 1976 the club moved to a new sailing water at Ringwood. Friction within the members led to the club being split and the offshoot members returning to Setley lake in 1978 as the Solent R/C MYC. The trophy remained at the New Forest club until it went out of existence in the 1980’s.

Some years later efforts were made by Bob Jeffries to locate the trophy and it was eventually returned to the Solent club and sailed for as an annual Marblehead match racing event starting 1987. It remained so until 1991 when, owing to the increasing popularity of the International One Metre Class, it became a One Metre match racing event. More recently it has been sailed for as an International One Metre day event trophy.

The gap in years in the winners list represents the time between the demise of the New Forest Club and the return of the trophy to the SRCMYC.