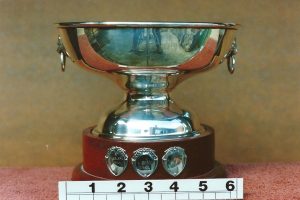 Gifted in 1987 by member Mr Derek Thomas without any conditions of use. Initially it was used to promote Marblehead match racing. An annual Sunday event for match racing was introduced into the sailing programme and remained so until the 1994. Owing to a decline in the number of Marblehead yachts being sailed, it was decided to switch the event to the more popular International One Metre Class. More recently it has been sailed for as an International One Metre day event trophy.