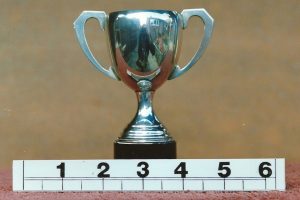 This small unnamed trophy was the last to be gifted to the club by Mr C.R.Jeffries just prior to his death in 1988. There was no specific request as to its use and it remained unallocated by the club until 1994 when it was given to the scale section in an effort to promote competition within that section. The scale members were not keen and the trophy was transferred back to the sail section in 1995 and awaits a decision as to future use.