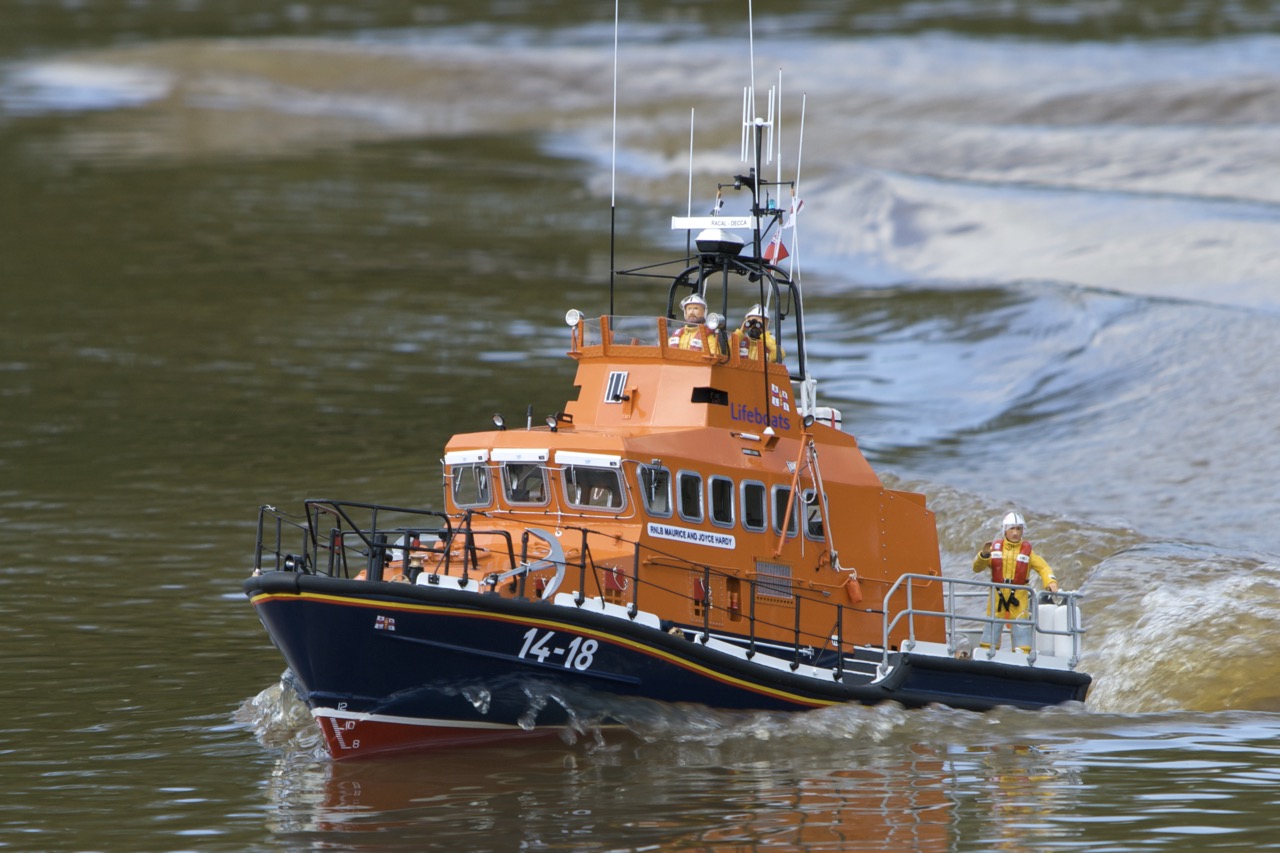 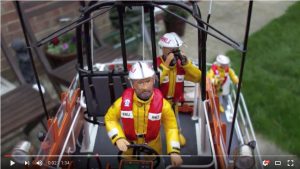 David’s Comments (May, 2011): “The model is of the “RNLB Maurice and Joyce Hardy” based at Fowey in Cornwall; basically a Model Slipway Kit, it took some 14 months to build. I used many references to bring the model up to the current Trent Specification. Photos, Internet, Drawings obtained from the RNLI (always very willing to assist modellers) and info from the Fowey Lifeboat Website. The main differences being the alteration of the rear steps to accommodate an outboard motor and stand underneath them with a larger dinghy box on the port engine vent casing. The wheelhouse interior has been modified with arm rests etc on the seating and more detailed seating bases with fire extinguishers, charts, extra radio sets etc, the wheelhouse windows in the kit have been replaced with Speedline etched Perspex items which resulted in the need to modify the front window panels of the wheelhouse. Many other items were supplied/scratch built using parts from my “bits box”. The seated crew members inside the wheelhouse are supplied by George Turner and the Deck Crew are all Speedline Figures. 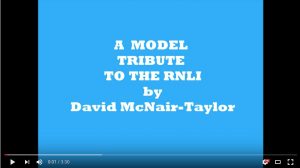 “The model is powered by two Graupner Speed 600 Eco motors driving brass four bladed props supplied by George Sitek and using 50 amp Viper Speed controllers with a full “Action” Power board, fuse assemblies, P100 “Noisy Thing” Sound module and a Action Amplifier, the working lights and searchlights are run via a control box constructed by our club “Boffin” Alan Bond. The radar is powered by a mini servo much cut down and modified to fit in the radar motor casing

“The main paintwork is done using Acrylic car paint spay cans. Decals and markings are from Barry’s Decals and the flags supplied by BECC, my local model shop, Westbourne Models in Bournemouth, supplied the kit, motors, plastic sheet, brass rod etc. The model was a real challenge to build and is certainly not for a beginner but great if you want to end up with a great model and a handy size for the car boot. ” 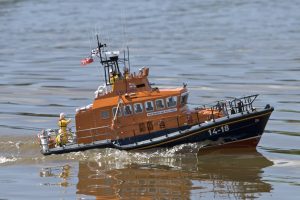 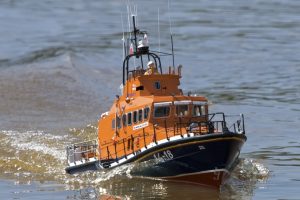 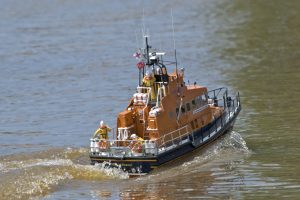 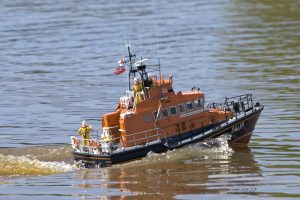 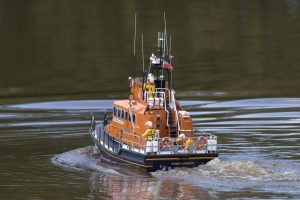 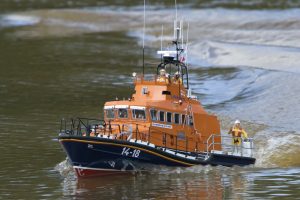 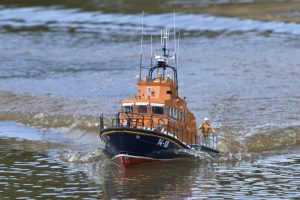 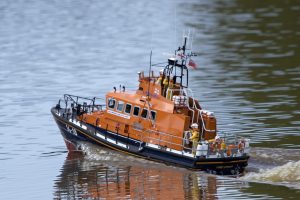 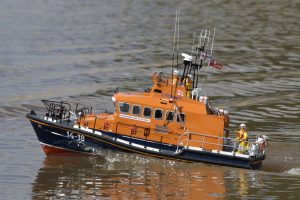 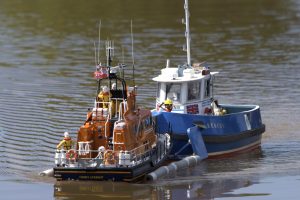 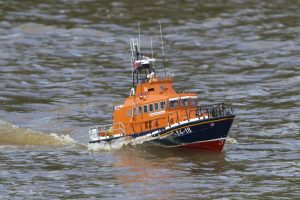 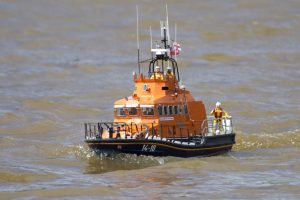 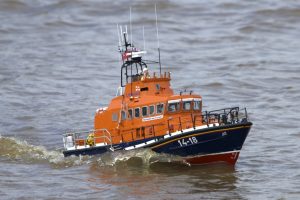 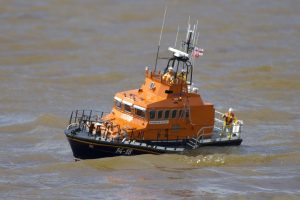 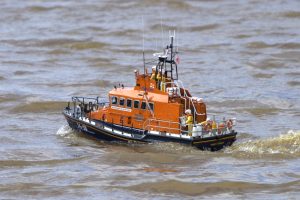 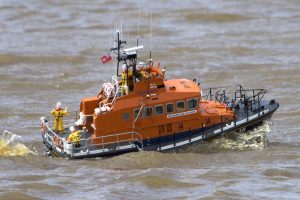 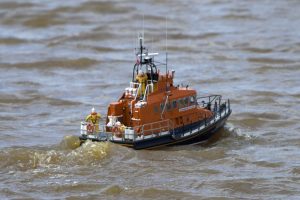 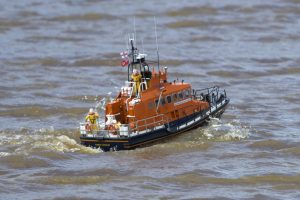 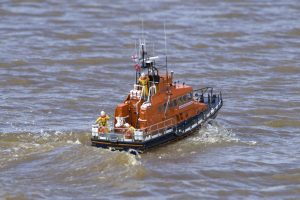 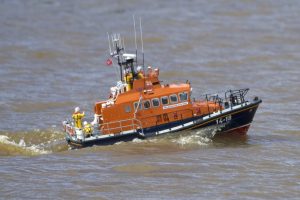 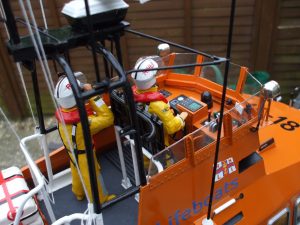 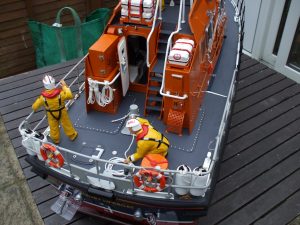 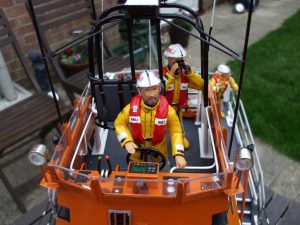 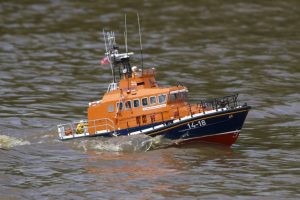