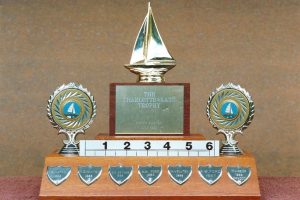 Presented to the club in 1982 by Mr Derek Easter and named after his two daughters. It was originally intended as a Marblehead trophy for an annual Sunday event but as there are no conditions attached to the trophy its use is at the discretion of the club committee. It is presently used as a Marblehead Trophy.

Solent Radio Controlled Model Yacht Club Home Page > Club Trophies > Charlotte & Kate Trophy
We use cookies to ensure that we give you the best experience on our website. If you continue to use this site we will assume that you are happy with it.Ok