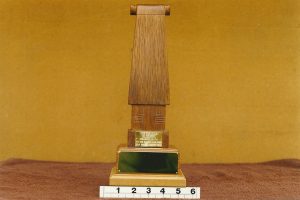 Early in 1994 the club was asked by Mr Brian Wiles of the Sedgemoor club to host a One Metre class meeting for the benefit of Mr Mark Steele, Regional Director of the Fiji Visitors Bureau in Auckland, New Zealand, who was on a part business, part pleasure, visit to this country. The One Metre class was requested because of its popularity in New Zealand and its combined promotion with Fiji tourism by Mr Steele.

Sunday 13th of February 1994 was the date selected which turned out to be an extremely cold but dry day with a good wind. Twenty-three yachts competed. Mr Steele was loaned a boat for the day by one of our members and managed to sail it into last place in every race. Nevertheless the day was a great success, so much so that in 1995 Mr Steele gifted a trophy to the club, together with a medal for the winner to keep, and requested that it be used for an annual event to be known as the “Fijicicle” meeting – a humorous reference to the conditions during the event.

The trophy is an outright gift to the club and is the property of the Solent club. The 1994 meeting winner is included in the winners list for interest only, 1995 was the first year for the Fijicicle trophy.

From 1995 ongoing  – IOM Day Event Trophy, to be programmed for a cold day in February!