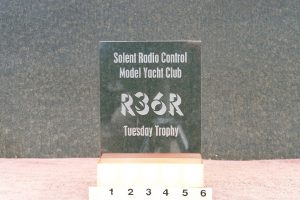 Gifted to the club In 1994 by the President, Mr. Eric Shaw, as a match for the one metre Tuesday Trophy which was also gifted by Mr Shaw in 1993. There are no conditions attached to this gift. As the trophy is engraved with the R36R insignia its use is obviously limited to that class. The club committee decided that the trophy is to be used for an annual one day event; however it is now presented to the winner of the R36 Summer Series.