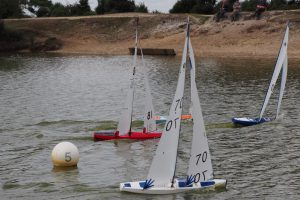 A game of two halves today, before the break we had a gentle northerly – fairly steady for Setley where we sailed 4 races. Whereas after the break we managed just 3 races in variable light to nothing, where the occasional wind streak would collect a boat give it half a leg lead randomly.
Good to have Simon competing today, unfortunately for him only for the second half – hopefully conditions can only get better.
Despite the failing breeze, the sun was shining and racing was very close. Martin Hart started well, leading most of the first three races, though he did the friendly thing of sharing the wins with Peter and John M. After 5 races the first three boats had equal points with the top two on equal points at the end with John M winning from John T on count back.
Congrats to John T who wins the Summers series.