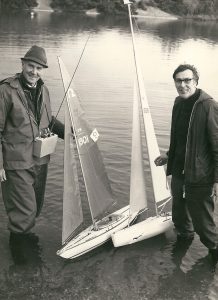 Bob Jefferies and David Waugh in 1974 at the time of the Southern District RM Championship held at Setley.

Following his article in the May 1972 Model Boats Magazine, which ended with the suggestion of forming a Club, Bob Jeffries became the acting secretary, and later Commodore, of the New Forest Model Yacht Club. The following is an extract from the SRCMYC Newsletter of February 1989 which reported the death of Bob Jeffries on 15th October 1988:

“Bob, whose business career had been in radio, was involved in R/C sailing from an early stage, when ‘on board’ equipment weighed 12-15lb, and the only Class big enough to carry it was the “Q” (later “RA”); he did much work on development of this side, publishing many articles and winch designs in the model press, and was the author of the first book on R/C Model Yachting, around 1970. Retirement had brought him to this area, and after some years with the “RA’s” at Poole, he founded the New Forest Club to sail “RM’s” at Setley, which expanded rapidly and made a name for itself before being driven away from Setley by the disastrous drought of 1976. After a year away. Bob opted to come back to Setley (which had refilled satisfactorily) and founded this Club, with an initial membership of 51. He was the first Commodore, was responsible for reaching an agreement with the local power boat enthusiasts and establishing the Scale Section, being elected Life President after a few years in recognition or his service. He supported each Class in turn and was always competitive in each; he continued to write for the model press, and his last article, on the 1-m Class, as the writer has reason to know, was the source of much interest in the Scale Section, and in both Sections, there is little doubt his presence and influence will be much missed.”

The original article, a review of the “Star-C” model yacht, in which the formation of a Club was first suggested can be viewed here.