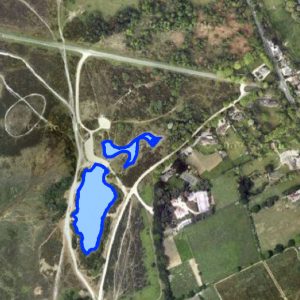 In 2016 the most recent Ordnance Survey mapping shows a full pond with the heathland area north of the main car park also marked as water.  The southern most (main) car park was flooded in 2001 (dubbed “Setley-on-Sea” by one member) and a pond full to over flowing has been a feature of the last few years.

Indeed the most recent “Google Earth” imagery (from April 2014) shows water across the car park joining the pond to the flooded heathland. Perhaps this is not surprising when one realises that the pond is simply the lowest, flooded part, of an historic gravel pit.

Comparing Setley Pond today to photos from the 1960’s onwards, the most obvious change is the growth of trees and bushes around the edge of the pond.  This provides a haven for wild life but makes model yacht sailing more tricky!