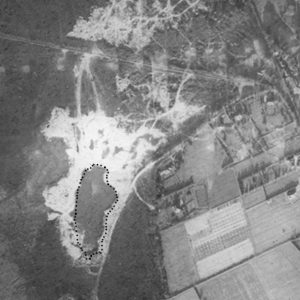 This aerial photo was taken in December 1946. The dots show the outline of the present Setley Pond when it is full but not over-flowing. It appears that the pond area was excavated during the Second World War although in 1946 it either did not contain water or the water was very shallow. The lighter coloured areas are probably tailings from the gravel workings. They extend down the slope to the west of the pond edge.

It has been stated that gravel was excavated at Setley during 1941 for the construction of Stoney Cross airfield (e.g. see New Forest Explorers Guide), but the closer Lymington Airfield, Beaulieu Airfield, or the local Setley Plain Prisoner of War Camp seem more logical explanations. (original photo © Crown Copyright )